There are many devotions associated with the Franciscan family: 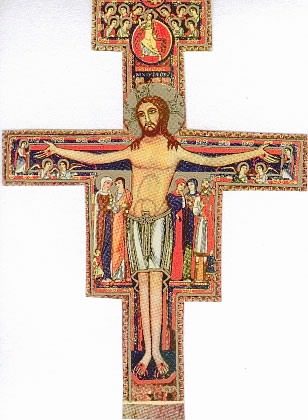 This Cross is now seen in many Franciscan Churches. It is an icon of the Risen Lord with many small icons incorporated into it, depicting scenes from the Passion.

During the Middle Ages this was a very popular devotion and this was the Cross in front of which St. Francis was praying when he heard the words “Go Francis rebuild my Church”. St. Clare who lived out her life in San Damiano would have prayed before this Icon. The task of repairing and rebuilding the Church continues in our day and we the followers of Saints Francis and Clare are dedicated to this mission. Christ addresses these words to all the baptised, to each of us He says “Go rebuild my Church”.

We are all called to repair in every generation the house of Christ, the Church, and you. And only by doing this does the Church live and become beautiful...through the different vocations, from the lay and family vocation, to the life of special consecration, to the priestly vocation. c.f. Pope Benedict XVI to young people in Assisi.

The Way of the Cross

The Franciscan Priest St. Leonard of Port Maurice (1676-1757), who was a renowned preacher popularised the devotion of the Way of the Cross, to-day these Stations commemorating our Lord’s Passion can be found in almost every Catholic Church throughout the world.

Saint Leonard wrote “What salutary insights will the continued meditation on the bitter passion of the Son if God stir up in the soul! Daily experience has taught me that by this devout form of prayer peoples lives are quickly changed for the better. For the Way of the Cross is the antidote for vice, the cleansing of unbridled desires and an effective incentive to virtue and holiness of life. Indeed, if we set the excruciating sufferings of the Son of God portrayed in so many vivid pictures before the eyes of the soul we can hardly refrain from abhorring the defilements of our own life because of the abundant light that fills our soul. Nay, I should rather say we will be urged on to repay such great love with our own love, or at least to bear willingly the misfortunes that from time to time in every walk of life fall to our lot”.

The Holy Name of Jesus 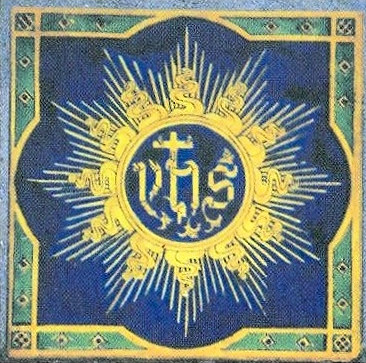 IHS tileSt. Bernadine of Siena (1380-1440) spread devotion to the Holy Name of Jesus. He encouraged the faithful to place banners showing the first three letters of Jesus as spelt in Greek: “IHS” surrounded by rays, in their homes.

St. Bernadine proclaimed in one of his sermons:

“The name of Jesus is the splendour of preachers, because it causes his word to be proclaimed and heard with glowing splendour. Whence, do you think, came the great sudden and shining light of faith that filled the world, if not from the preaching of Jesus? Was it not by the light and sweetness of this name that God called us into his wonderful light? It is to us, on whom the light has shone and who in that light we see light, that the apostle addresses these apt words: ‘Once you were darkness, but now you are light in the Lord; walk as children of the light.’ Hence this name must be proclaimed so that it may shine; it must not be hidden. But when it is preached, it must not be proclaimed by an impure heart or an unclean mouth, but it must be kept safe and handed on in a chosen vessel.” 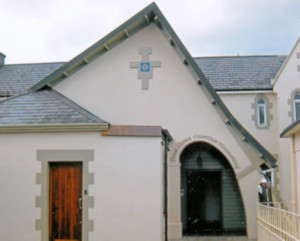 IHS tile incorporated into the cross on the wall of the Poor Clare monasteryTo-day at our Poor Clare Monastery we have preserved this tradition as we have the IHS on a tile which is placed in the wall of the main entrance into our monastery. To this day small blue tiles can be seen over many doors of houses in some Irish cities and towns.

The Tau which many people have mistaken for the Letter T was used by St. Francis at the end of all his letters.

Tau is the last letter of the Hebrew alphabet. It had a symbolic meaning in the Old Testament. (cf. Ezec. 9:4). It was the sign by which the Anawim, or pious, poor, humble remnant of God’s Chosen People, manifested their ardent hope and desire for the promised salvation from on High. 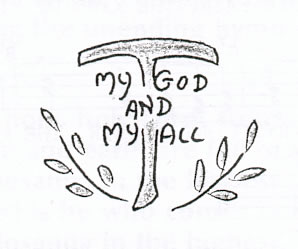 In the New Testament the tau indicates those who confidently await the Parousia or coming of Christ in triumphant glory. (cf. Rev. 7:2,3). The letter tau is also a reminder of the indelible mark impressed on our souls at Baptism by which all the faithful participate in the Priesthood of Christ. (cf. Eph. 1:13).
So there are two principal reasons why all committed Christians should reverence the Tau sign:
Firstly it is indicative of our Christocentric spirituality: “I am the Alpha and Omega, the First and the Last, the Beginning and the End. (cf. Rev. 21:6; 22:13).
Secondly, and above all, it is an actual representation of the Cross on which Our Divine Lord immolated Himself unto death for the eternal salvation of the world. We need to participate in His Paschal Mystery in order to share in His eternal glory, (cf.Mt. 16:24; Jn. 17:24).

St. Francis of Assisi, the visionary of San Damiano and the Stigmatist of La Verna, yearned for nothing more than that “all things be renewed in Christ”. (cf. Eph. 4:22; Col. 3:5-11). For him it proclaimed the blessedness of Gospel Poverty which is the foundation of the whole Franciscan Way of Life. It was also an expression of the saint’s love and faith. (cf. 2Cel, 106). With this sign the Poverello began every mission and autographed his Blessing for Br. Leo, and all his letters. Marked with the Tau of Christ everyone and everything were assured of the Divine Protection and Benediction.

To-day, many people wear the tau as a sign of their admiration of Francis and his ideals. More importantly they wear it as a tangible reminder of Christ’s Paschal Mystery by which He glorified the Blessed Trinity, reconciled us with God, and filled us with the hope of heaven. Although the Seraph of Assisi did not introduce this devotion into the Church – St. Denis had done so two Centuries earlier - the tau sign so venerated by him is the oldest and most common indication of membership of the Franciscan Family.

This devotion dates back to the 15th Century. It is also called The Rosary of the Seven Joys of the Blessed Virgin, or is known quite simply as the Seven Joys. The famous Irish Franciscan historian Fr. Luke Wadding relates that a young man in his initial studies for the friars was about to leave the novitiate because he was no longer able to continue his devotion to adorn a statue to the Blessed Virgin with a wreath of fresh flowers. We are told that the Blessed Virgin Mary appeared to him and encouraged him not to be sad because she was going to teach him a new way of weaving a crown for her.

When Our Lady had disappeared, the young man began to recite the prayers in honour of her Seven Joys. His Novice Master happened to pass by and he saw an angel weaving a wreath of roses and after every tenth rose he inserted a golden lily. When the wreath was completed, the angel placed it on the head of the young man. The Novice Master demanded under holy obedience that the youth tell him the meaning of the vision. Joyfully, yet fearfully, the young man complied. The Novice Master was so impressed with what he had seen and heard, that he immediately told the friars in his community.

This is the Origin of reciting the Franciscan Crown which has spread over the entire Order. Later on two Hail Marys in honour of the seventy-two years that Our Lady is believed to have lived on earth. One Our Father and Hail Mary are said for the Pope’s intentions.