St Colette and the Poor Clares of Cork 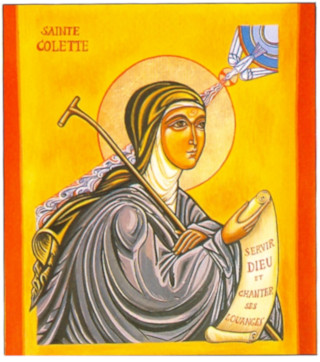 For fifteen centuries beloved St. Nicholas has given gifts to child-like hearts.

History records that on January 13, 1381, in the little town of Corbie in France, his petitioners, the elderly Robert and Marguerite Boëllet, who in her 60th year, jubilantly welcomed the birth of their “miracle baby” Nicolette.

Graced by God, Colette thrived. After her parents’ deaths, aged 19 the young Colette, who was in the care of the Benedictine Abbot of Corbie, sought religious consecration and thus became an enclosed anchoress.

But her Lord had other plans. While Europe was fragmented by wars and strife and the Church was rent by schism, the religious orders suffered decline. All these seemed without remedy. But Saint Francis begged Our Lord to empower Colette to restore the fervor and primitive observance in the Franciscan Orders. Once God made this known to the startled anchoress, and plainly insisted upon it, she completely surrendered herself to His will, saying, “Dear Lord, I am Your handmaid”.

Only one totally given could have said “yes” to the subsequent years of uncertainties, wearying work and travels. She founded communities of the primitive Rule of Saint Clare and put fresh life in them with the spirit of their Holy Mother, eventually giving them Constitutions. Colette was a mother to her daughters in religion who drew strength from her. The Church has recognised her powerful intercession for all mothers, expectant mothers, and those longing to start a family, and has named her their special patroness. Colette died on March 6, 1447, and was canonised in 1807.

The Father of all Mercies,
The Son by his Holy Passion,
The Holy Spirit Fountain of Peace
of Sweetness and of Love,
fill you with all consolations.
Amen

St. Colette receives the Rule of Life from St. Clare

(a detail from an icon by Paolo Orlando for the Poor Clares, Poligny, France)

1400 - Colette investigates God’s path with the Beguines, the Benedictines and the Order of St. Clare.

1402 - September 17th, retires to a cell built onto the wall of the Church of Corbie as anchoress and leads a life of prayer and penance.
1406 - Accepts the task of restoring the original spirit of Francis and Clare in the Franciscan Order. This is confirmed by the Anti-Pope, Benedict X111 whose election was later found to be invalid. When she realised she had received permission from an Anti-Pope she appealed to the real Pope Martin V and repeated the whole foundation process.

1410 - Founded the first Monastery in Besançon, a further sixteen follow.

1429 - Supposed meeting of St. Colette with St. Joan of Arc at Moulins.

1434 - William of Casal, the General of the Franciscan Order, agrees with her reforms and approves of her constitutions.

1440 - The Franciscan, St. John of Capistrano who at first wished to curb Colette’s aims becomes her colleague.

1442 - First visit to Ghent and first Belgian foundation there.

1448 - Papal approval of the constitutions, writ- ten by St. Colette

1453 - Opening of the cause of her beatification in Rome. 1479 - Monastery founded in Bruges, Belgium from Ghent.

1914 - Our Monastery in Cork founded from Carlow. 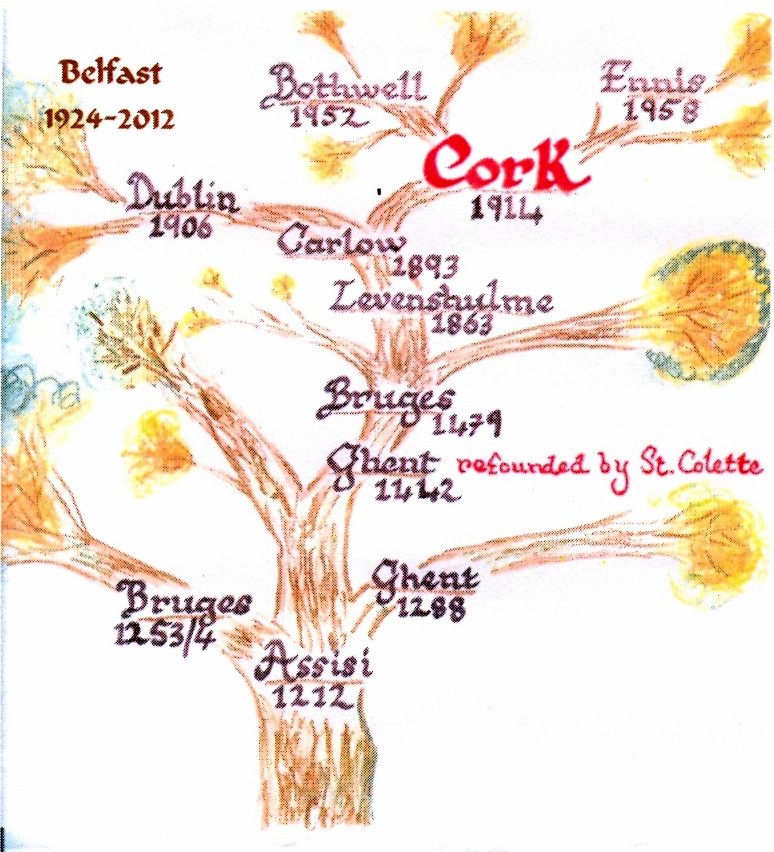