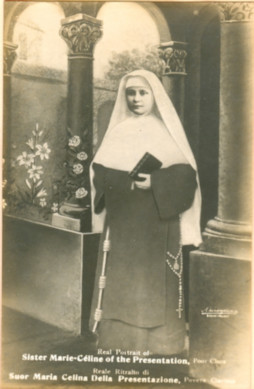 As for me, I place myself entirely
in the Divine Heart of Jesus.

True happiness
is not to be found in this world,
but one may have it
by belonging entirely to Jesus.

As we are going to God, it is better to give
ourselves entirely to Him.

“This morning in Bordeaux, Cardinal Jose Saraiva Martins beatified Sr. Marie-Celine of the Presentation of the Blessed Virgin Mary, a professed nun of the Second Order of St. Francis. Her life, marked by the Cross, was intended as a sign of love for Christ, as she herself said: ‘I am determined to be a rose of charity’.”

Blessed Marie-Celine of the Presentation 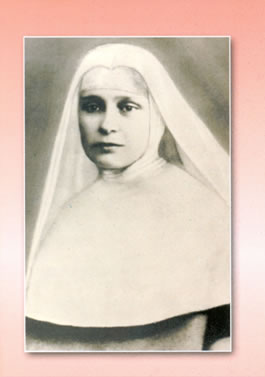 Blessed Marie-Celine of the Presentation
1879-1897
Beatified at Bordeaux, France
on Sunday 16 September 2007

Marie-Celine, known before her entrance into religious life, as Germaine Castang, was born in a little village in the region of the Dordogne, in the south west of France, in 1878. She was the fifth child in the family, which was to number twelve children in all.

Germaine was a lively, somewhat precocious child, dearly loved by all her family. Her parents were known in the entire district for their faith, piety and extraordinary charity towards anyone in need. Germaine’s mother was firm in correcting her children’s failings. She was regarded as a saint by many who knew her.

The family lived in a large house near the village church. The parents worked hard to support their family. Germaine loved to visit the church, inheriting her parents’ faith and love of God.

Suffering came to Germaine at the early age of four years. Coming home from school with some little companions, one child suggested that they go paddling in an icy-cold stream. Germaine was eager to join in the adventure. However she was clearly unwell afterwards and a serious leg ailment developed. Madame Castang was distraught to see her little daughter in such pain, scarcely able to walk, and as always she turned to prayer, begging for a cure. Her prayer was not answered in the way she ardently desired, but the Lord gave Germaine abundant grace to cope with her disability. Germaine, too, turned to prayer and, inspired by her mother’s words, bore her ailment admirably. Her mother spoke to her of Jesus Crucified, of the patience of the Saints and of Heaven which would heal all.Germaine found increasing comfort in the nearby Church, close to the Tabernacle. Her love of Jesus was growing daily. Even as a child, people noticed how attentive she was at prayer. She eagerly awaited the day when she would, for the first time, receive Jesus in Holy Communion.

About this time Germaine’s father began to experience financial problems and, as a result, he became irritable, angry and difficult. At times he was harsh towards his gentle wife and the whole family suffered from the changed atmosphere in the home. Some of the family criticized their father, but Germaine was never heard to do so. She suffered in silence, endeavouring to help her mother in every way she could, taking care of the smaller children and helping with the household duties.

In 1887 the family circumstances were so difficult that they were obliged to look for help. Those who had given so much in charity were now forced to receive it. One day disaster struck. Monsieur Castang’s creditors would wait no longer. His lands, his home and all his goods were sold to meet his debts.

Early one morning the heart-broken family left their home and walked a few miles to a field which they still owned. Their father had built a rough shelter there. It was scarcely fit for animals, yet here the family which now numbered nine, were obliged to live, for three long years. They lived in extreme poverty, their father often away in search of work.

Germaine’s leg condition deteriorated in the dreadful living conditions, yet she constantly thought of the others and did all she could to raise their spirits and ease their suffering. On one occasion, conquering her pride and enduring atrocious pain in her leg , she took a wheelbarrow and went begging for food at the surrounding farmhouses, desperate to provide something for her starving brothers and sisters.

One day, overcome by sorrow and realising her powerlessness to save her family from their dire poverty, Germaine turned to God in most ardent prayer: she offered her life in sacrifice for them. It seems the offering was accepted. Shortly afterwards, their father returned from Bordeaux with the wonderful news that he had found a job and had rented a little house. At last they could live a normal life once more.

The family reached the city towards the spring of 1890. Germaine’s burning desire was to return to school so that she could resume preparations for her First Holy Communion. She was now preparing for death and longed to receive Jesus before she might die.

In 1891 an operation on her leg was very successful and Germaine was able to walk fairly easily. Sorrow, however visited the family yet again. Three of her younger brothers died within the next few months, and the eldest brother returned from military service in very poor health.

At about this time Germaine was received as a boarder in a place run by Sisters in Bordeaux. She was very sorry to be leaving home but glad that here at last she could prepare for the great grace of her First Holy Communion.

This long-awaited day dawned on June 16th 1892, the feast of Corpus Christi. Germaine had always experienced the attraction of Jesus in the Host. Jesus had been her refuge and comfort in so many trials. He was her love. Witnesses said: “On this day she shed many tears of joy and emotion”.

A little while after this sacred occasion, Germaine received the Sacrament of Confirmation in Bordeaux Cathedral, the Bishop giving her the name Clare, a providential sign of the future.

The great grace for which Germaine asked on the day of her First Holy Communion was that she might become a nun. She lived only for God; to enter the House of God and there completely consecrated to Him, to be consumed in His service and love, to spend long hours in prayer before the Tabernacle: that was her ideal of life. Her thoughts turned first to the Poor Clares.

Before she entered, Germaine endured the sudden death of her mother, then of Louis, her eldest brother. Germaine nursed him during his last days. Finally after waiting three more years, the doors of the Poor Clare enclosure opened for her on June 12th 1896. She was eighteen years of age. She subsequently received the Poor Clare habit and the name Sr. Marie-Celine of the Presentation.

Within a short time, Sr. Marie-Celine was diagnosed with a very serious illness. She was granted permission to make her vows and was professed on her death-bed, at the age of nineteen. The Lord called her Home to Heaven on May 30th 1897.