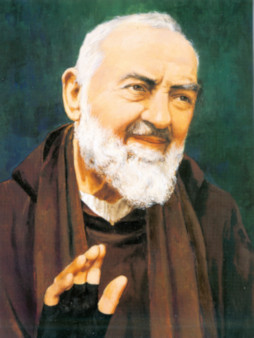 Saint Pio of PietrelcinaFrancesco Forgione was born on 25th May 1887 to humble farming people in Pietrelcina, Southern Italy. When he was ten years old after hearing an inspiring sermon he declared he wanted to be a priest, and again a year later he insisted “I want to be a friar with a beard”! The cheerfulness and black bushy beard of a friar distributing medals, holy pictures and chestnuts to children had impressed him.

He would need a certain standard of education before he would be accepted in the seminary or novitiate.

This involved his father working abroad so that he could be tutored privately until the age of 15, he then entered the Capuchin novitiate at Morcone, Italy.

After being clothed in the Franciscan habit he was given the name Brother Pio. He did not enjoy good health but by the grace of God he was finally professed a Capuchin Friar on 27th Jan 1907 and ordained deacon in Jan 1909. His health continued to decline and he begged his superiors to allow him to be ordained before reaching the acquired age of 24. Brother Pio was granted special dispensation and on 10th August 1910 at the age of 23 he was ordained a priest in the Cathedral in Benevento, Italy.

Less than a month later he received the wounds of Christ and pleaded with our Lord to take away the visible signs, although he didn’t mind suffering the pain. The wounds disappeared and reappeared again one year later.
In 1915 Padre Pio was drafted into the Italian army he was assigned to “internal services” and due to poor health he was finally discharged from the Army.

He was a man who devoted himself to long hours of prayer and had a burning love for Jesus and our Blessed Mother. He gave spiritual guidance to many people through numerous letters that he wrote and countless people were drawn to his confessional.

In 1918 while hearing confessions he received what is known as ‘Transverberation’ of his heart, causing a visible wound on his side. A few weeks later he received the stigmata. In a letter dated 22nd October 1918 he wrote to his Spiritual Director “I saw before me a mysterious person....his hands and feet and side were dripping blood... I thought I should die and really should have died if the Lord had not intervened and strengthened my heart which was about to burst out of my chest. The vision disappeared and I became aware that my hands, feet and side were dripping blood”. These wounds were examined under the instructions of the Order and the Vatican. For a while St. Pio was banned from hearing confessions and saying public Mass. He was always obedient to his Superiors’ orders.

During this time he celebrated Mass privately and he could take from one and half hours to three hours to do so. He also spent many hours in private prayer and study. It was a great joy to him when on 15th July 1932 he was allowed to resume his public Mass.

He inspired the building of a hospital which became known as the “Home for the Relief of Suffering”. This hospital was built near the friary and was opened on 5th May 1956.

In 1968 on 20th September his prayer groups which had been approved by the Vatican had gathered in San Giovanni Rotondo for a congress. After celebrating the Opening Mass at 5 am he almost collapsed and was taken away to rest. He still managed to bless the crowds from his balcony but admitted that he belonged more to the other world that to this one. Pray that I might die”. On the 23rd Sept 1968 Padre Pio gave up his soul to the Lord. He was canonized by Pope John Paul 11 on 16th June 2002 and we celebrate his feast day on 23rd September.