Dancing at the Crossroads! 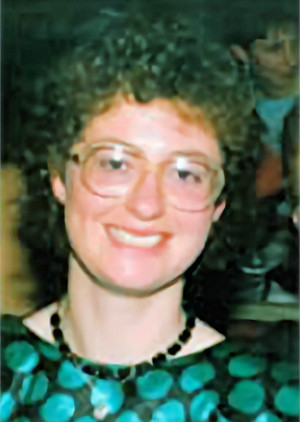 On a Friday in June, 1988, I completed my final exams at U.C.C. It was a great relief to be finished although, of course, I did feel some anxiety about the results!

Reaching the end of my studies, however, meant that another problem now raised its head...

What would I do next? I was back at a very definite crossroads, similar to the one I had encountered after my Leaving Cert. three years earlier.

I remember, that summer, in 1985, having a late breakfast at home one morning. I was on my own in the kitchen, when Dad came in. He told me that if I wanted to be a nun, he and Mammy would give me their support. I was very touched and grateful for his words and gentle encouragement. I was just seventeen then. The thought of becoming a religious sister was at the back of my mind and I think I was more comfortable keeping it there!

In any case I was probably too young or immature to join a Religious Order at that stage. One of the reasons why I had chosen, at that time, to go to U.C.C. was to help to re-start the Legion of Mary on campus.

I had joined the Legion of Mary in my hometown, Templemore, when I was all of ten years of age and I know that I have received many blessings through this movement. I had also thought that studying law might enable me to make some little difference in the world, in relation to human rights, justice etc. I had, with God’s help, made it to the end of the course, but I knew now that a career in law held little or no attraction for me.

The day after I finished my exams, I got the train home. That Saturday was the annual Ordination day at Thurles Cathedral, so, instead of travelling on to Templemore, I got off at Thurles. (My eldest brother had spent some years in Thurles Seminary and was later ordained a priest in Brazil.)  Providentially, I met one of our local curates and he very kindly took my rather heavy rucksack in his car! The ordination ceremony was truly inspiring. I can still recall the first candidate that day, also from Templemore, coming forward to make his commitment with the words:”I am ready and willing.” The example of these men gave me courage as I tried to discern God’s will.

After the ceremony I met my parents who were there as invited guests (I wasn’t invited except by the Holy Spirit!) and travelled home with them. Before leaving I met a friend from Cork. I was surprised to meet him there and his explanation was a little puzzling! But it was nice to see him anyway!

A few days later, back in Templemore, I plucked up the courage to talk to one of our priests. He was very kind and helpful, and encouraged me to take the next step. So, within a week or two, I returned to Cork, to College Road, near U.C.C., and ventured in to the Poor Clare Monastery! I had attended Mass and Benediction here from time to time, but this was my first time meeting an enclosed nun! I was pretty nervous!

The Sister I met put me at my ease immediately. She radiated joy and friendliness. The room where we talked is divided by a grille: a sign of the nuns’ vow of enclosure. I didn’t find this at all intimidating. The room was lovely and bright and there was a beautiful statue of Our Lady facing me. It made me feel “at home” to see that it was a replica of the statue always used at Legion of Mary meetings! Our Lady was here before me to welcome me!

I intended “looking around” at different Religious Orders during the summer and then entering somewhere in September. (It didn’t cross my mind that God might have other plans!) Later that summer, I met my friend whom I had “run into” at Thurles Cathedral. I was going to tell him about my tentative plans to become a nun, but he forestalled me by telling me his plans, which were at a far more advanced stage: he would be starting in the seminary ... in September! As my process of discerning God’s call was moving at a slower pace, I kept it to myself at that stage!

I visited another contemplative community in Dublin that summer, but was still undecided. Somehow the time did not seem to be right. I was still rather young to enter an enclosed order. Around that time I was asked would I consider going to France for some months, to help extend the Legion of Mary. A girl called Mary, whom I knew, had decided to go and I agreed to go with her. It would be a six-month trip. By this time my parents knew I was considering entering the Poor Clare Monastery in Cork, so, in a way, my going to France was like a preparation for my leaving home for good. So it was hard, especially for my mother.

We flew out from Dublin in November and visited many different parts of France, doing our best to strengthen and expand the Legion of Mary. We met many wonderful people. It was a marvellous opportunity and it also widened my horizons! On several occasions we visited enclosed religious and I felt a strong attraction for and appreciation of their way of life. We spent that Christmas at the Carmelite Monastery in Avignon, staying in their guest-quarters. Another lovely memory is of arriving in Lourdes on my 21st Birthday! My family and friends had sent lots of good wishes, letters etc. so my day was made!

In May we returned to Ireland. I was hoping and praying that no-one would ask me: “What next?”, at least not for a few days! But my sister raised the question within hours of my landing! I was back again “dancing at the cross-roads”! But this time my Divine dancing partner wasn’t letting go! 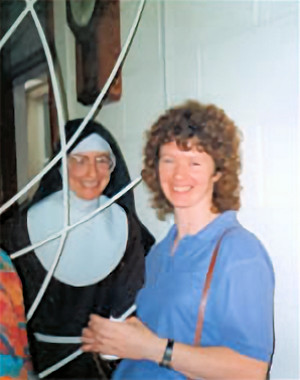 Sr. Colette-Marie of the Holy Cross with her sister at the parlour grille

Back in Cork, I made contact again with the Poor Clare Sisters on College Road and they sent me to a Franciscan priest, Fr. John Bosco. I did a retreat with him and gradually prepared to “take the plunge”. That summer was really warm and beautiful and Fr. John Bosco’s talks were very inspiring. The Lord was melting down my resistance!  Entering an enclosed order, however, is not for the faint-hearted and it was a very emotional time. At this stage all of my family knew, and it was difficult and traumatic for them too. If I entered I might never be home again. My eldest brother, now in Brazil, was still hoping I would join the Sisters of his Order. When I wrote to tell him of my decision, my letter reached him on August 11th, the feast of St. Clare! So he accepted that it was God’s will!

October 7th was soon fixed for the day of my entrance. I was very happy with this date, the feast of Our Lady of the Rosary, as the daily family Rosary was a special part of our home life. During the summer, we had the great joy of the wedding of one of my brothers and, just a week earlier, one of my sisters gave birth to her first baby, Caoimhe. I was able to attend her Christening two weeks before I entered. The sorrow of my “departure” was eased by these blessings. God is so good!

After entering, I spent one year as a postulant, then I received the Poor Clare habit, the white veil of a novice and my new name “Sr. Colette-Marie of the Holy Cross”. Two years later I made temporary vows. Six years after my entrance, I made solemn vows for life: of poverty, chastity, obedience and enclosure.

Now the dance had begun in earnest!